The Tale of the Body Thief by Anne Rice This 4th book is different thenI expected. I didn't expect my Vampire Lestat could be so evil at the end. It is kind of weird that Lestat were in different body and he have to find the Body Thief with a help from his friend. I thought this is what Lestat wanted of become a human, but no he seeing a bigger picture. He doesn't miss being human, he miss being his old devil self. I was kind of not surprise that Louis turn Vampire Lestat down, that he refused to help him while he was mortal. Good thing one of his mortal friend didn't turn him down, without him he would be stuck as a mortal. To be honest this reading is not bad at all, just pretty interesting. I'm not much of a lawyer and country person. But reading this just make me want to know what happen. I really Kenna, because she can fight for herself and protect herself if something bad is about to happen. To bad Kenna and her group of friends didn't get a chance to caught him, only Whitney. OMG, what can I said about Whitney. She is so all over her head and need go to rehab. All she think about is money, fame, and just look perfect. If I were there I would love to see how she end up broke and think she is a horrible person which she is. The story said what?!?!?!? I think I just fell love with this story. I am shock at the ending, it was kind of weird but a little sad though. I feel bad about Keegan, because she she doesn't remember what happen to some part and she doesn't remember or know who her soulmate is. She was brought back to life as a second chance with dark magic from her friend's mother and that is how she doesn't remember some parts. I wonder know what happen to the rest. It is true that once you are brought back your feeling for the chosen will never be same? What will happen to her? How can Rourk go through this that Keegan doesn't know him at all? Please let me read the next series.

The Queen of the Damned by Anne Rice 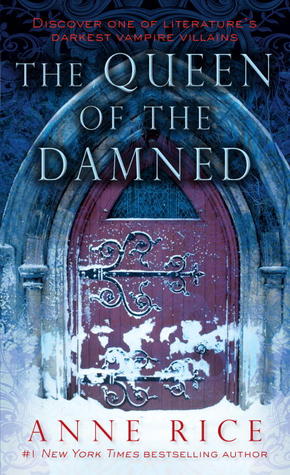 (Click the picture for more info.)
Review: Wow! What can I said about this book, beside that I love it. But this book is not like exactly from the movie that I seen. I really like this book and I have always adore Lestat. I have never expect the red hair twins have so much anger in themselves. Because Queen Akasha have made their life a living hell. Jesse is amazing person but she just want to know so bad in her own way. Like she trying to figure out the puzzle and what was the connection. I'm not shocked that Jesse kissed Lestat at the concert and tasted his blood from his sweat. To be honest, I think is weird that vampire sweat are only blood. I know their tears is in blood, but never the sweat. I understand that Lestat seem to have feeling for the Queen, but he is going have to learn to let it go. Maybe later on he will meet someone special in his life, even though he such a little devil.
Tweet

The Vampire Defanged: How the Embodiment of Evil Became a Romantic Hero by Susannah Clements This book is pretty interesting. At first I thought this book was a story, but I was wrong it was not. As much as I love Vampire, so I give this book a chance to read it. I was happy that I found some books, shows, and movies that I never heard of it, which I put that on my To Do List. I don't know why I'm so interested in vampire and lycan (werewolf). I don't used the word werewolf anymore, because lycan is better for me to say it. The reason why I call lycan is because of the movie called Underworld. I remember when I said "Lycan", to my friend. Some would have the weird expression and have no idea what a lycan. FYI: If you don't know what a lycan is, I suggest you watch Underworld movie or look it up on the internet. If you're the person who like to read about fact or religion. This book kind of telling you that you need to read deeply and soon you will understand.

The Ruins of Gorlan (Ranger's Apprentice #1) by John Flanagan

Just finish this book last night. I have to said it is not pretty bad. I thought it was going to be boring and not good. But I got interested in it, just wanting to know what happen next. I can't wait to read the next book to know more. I would have to said that my favorite character would be Halt, because I think the Ranger kind of sound cool and badazz.

The Buddha in the Attic by Julie Otsuka Story of a Girl by Sara Zarr this book is a lil bit different then the other books i read
i think i like deanna
because she think wat she have to said and do it right
i kno she was in past
bt she can't change it
she move on
bt the only thing she cnt move on was tommy, her friends, her father, etc.
bt she did have the time to think things through and talk 2 them wat she have been holdin on all these years This book is pretty interesting and not bad. Sometime I wonder what is like to meet a person who a freak in circus or whatever. When I said "freak", I mean like a person you have never seen before. A person you doesn't look like normal people. To me I wouldn't care and I wouldn't call them freak. They are human being just like us even though some have weird things in their life, but it is pretty interesting once you get to know them. The only thing I would to do is go to the circus, I have never been to the circus before in my life and that is the truth. There are some character that are pretty interesting in their own ways and I would so love to meet Leo aka Tattoo Boy. He sound cute to me in this book. :)
Tara Altebrando i just finish this book last night and i luv it. Moon is my favorite character but i also like the fledgings 1 queen and 2 consorts they sound so cute. i like Jade, she is strong and intelligence. Her mind set in the right path. As for Pearl, no offense, but she need a life. Why can't she find someone her age, proubly to busy with the young. It ike she MILF I'm just saying what on my mind. I gotta say what I gotta say. Sometime I wonder if Moon will ever find the real mother who gave birth to him, or which court he is from the past. And why Sorrow had him in the first place it ust doesnt make sense to me. That all I have to say love the book for the deaf girl to read. :)

Her Sister's Shadow by Katharine Britton omg hw can i say this bout this book this book is so freaking amazin sad yes bt shockin when i read the beginnin i thought bea was the pain in the butt i alwayz thought she was tryin 2 ruin lillia's life bt i was wrong she was protecting her the whole time and reading the middle bout izzy was really puzzlin when lillia and bea describe izzy i thought hmm maybe she is lillia's daughter which i was defintly right hw hello duh it keep describing that izzy more creative in art just like lillia was cuz there is defintly no way she the daughter of charlotte becuz she cook alot and it describe izzy bout cookin just art that hw i knew it was her daughter readin at the end i thought i will read more than that like is lillia is ever goin tell izzy that she her ownn daughter or soomethin like that bt that ok becuz this book is really gud :)

The Girl in the Blue Beret by Bobbie Ann Mason The Witch's Dog by Stephanie Dagg The Darkest Heart by Thea Devine